Soft Glassy Materials (SGM) encompass a large amount of everyday life materials ranging from microgels and emulsions to gels made of proteins (yoghourt or cheese) or polysaccharides (jellylike materials). The stress-induced yielding or failure of theses materials exhibit strong similarities with the rupture of solids under constant external load. Indeed, hexagonal phases, microgels, colloidal gels and glasses, etc. have been shown to exhibit a creep regime very similar to the one coined primary creep and reported by Andrade in 1910 for solids: under a constant applied shear stress, these soft materials present a transient regime during which their deformation rate decreases as a weak power law of time. In the case of solid crystalline materials such Andrade power law creep regime have been linked to the collective behaviour of defects (dislocations) inside the material. However, if crystalline solids now begin to be well characterized, it is not the case for amorphous materials, hard or soft, for which the microscopic scenario responsible for the Andrade creep regime has not been fully unravelled. We are currently investigating the Andrade creep regime in SGM to provide a generic microscopic scenario and determine how far the analogy between the rupture of SGM and the failure of classic solids goes.

Biogels behave as sponges. They exhibit a porous microstructure made of an interconnected network that is a priori efficient to retain solvents. However, these structures are often metastable. Indeed, the constituents experience attractive interactions and biogels spontaneously rearrange and shrink on durations ranging from hours to months leading to the progressive release of the solvent initially trapped. This phenomenon coined synæresis has been reported in a large amount of biogels such as gelatin, polysaccharide gels, globular protein gels, etc. and more generally in colloidal gels that display weak attractive interactions. If the latter category of gels has been the topic of numerous studies, only a handful of paper have reported quantitative measurements on the shrinkage dynamics of biogels, while the parameters controlling the detachment of a biogel from its container stands as an open issue despite its oustanding practical importance. We investigate this issue by means of interferometry, time resolved correlation spectroscopy and direct observations.

in collaboration with: P. Snabre (CRPP) & B. Mao (BioMérieux)

Thermo-responsive aqueous colloidal microgels are polymer colloids which properties depend upon the subtle balance of polymer/polymer vs. polymer/water interactions. Their degree of swelling and therefore their size can be controlled by temperature: the diameter of these particles and their individual elastic modulus increases with the temperature which allows us to go continuously from a dilute dispersion of hard particles to a jammed assembly of soft particles. We pay special attention to the local rheology of the fluid and in particular to the slip velocity that we determine for different temperature by extensive velocimetry measurements. The ultimate goal is to provide a unified scaling of the slip velocity with respect to the stress at the wall for different packing fractions, below and above jamming.

Biogels such as protein gels and polysaccharide gels behave as model brittle soft solids. These biomaterials behave as elastic solids under small deformations but display remarkable nonlinear behavior generally featuring stress- or strain-stiffening and fractures prior to irreversible rupture. So far, a huge effort has been devoted to the design of protein or polyssacharide gels with specific properties and textures at rest. However, their mechanical behavior deep into the nonlinear regime has only been partially addressed and several fundamental issues remain unexplored such as the spatially resolved rupture scenario or the physical relevance of the analogy with brittle failure in hard solids. This is the reason why we investigate stress-induced fracture in agar gels and protein gels by means of creep experiments coupled to optical and/or ultrasonic imaging.

Since the pioneering work of J.J. Thomson in 1885, one knows that a drop of a newtonian liquid falling into a miscible fluid turns into a vortex ring that expands radially before further destabilizing. How is this story modified in the case of a liquid drop falling into a non-Newtonian solution? This is what we are investigating by following glycerol drops falling into a polymeric solution. Depending on the fluid elasticity, two distinct scenarios may be observed: either the drop develops into a ring that expands radially as in the Newtonian case, or the drop maintains its shape and progressively empties itself through a thin filament connecting the drop to the free surface. We are looking for a criteria to account for these two scenarios, and investigate the impact of the fluid rheology on the drop dynamics.

Newtonian fluids can exhibit unstable flows for large values of the Reynolds number. As the Reynolds number increases, laminar flows first give way to non-trivial but coherent flow patterns such as vortices in a Taylor-Couette geometry, while for higher Reynolds number, the flow becomes turbulent. The same scenario occurs in non-Newtonian fluids due to their elasticity, and the destabilizing mechanism is linked to the non-linear rheology of the fluid rather than to inertia. Purely inertial or purely elastic instability regimes correspond to two extreme cases, and in general a viscoelastic fluid can be influenced by both the inertial and elastic non-linearities. Our overarching goal is to explain the non-monotonic effect of elasticity on the stability of any flow with curved streamlines and provide an extension of the well-known Pakdel-McKinley criterion for purely elastic instability. We perform systematic experiments in Taylor Couette flows with outer rotation, and for a finite elasticity, we expect inertialy unstable flows in the limit of large outer rotation to be stabilized.

A huge amount of soft materials display solid-like properties at rest and under relatively small shear stresses while they become fluid above a typical stress known as the yield stress. Examples range from daily products such as the foams or emulsions encountered in foods and cosmetics to drilling muds and granular materials. In order to assess the yielding dynamics of a simple yield stress fluid (i.e. a fluid well described by a Herschel-Bulkley model), we have performed extensive measurements coupling ultrasonic velocimetry to standard rheology in carbopol samples sheared in a small-gap Taylor-Couette cell. These experiments have revealed that the expected homogeneous velocity profiles are reached after a transient regime that involves shear-banded velocity profiles that can be extremely long-lived. The time to reach the steady state, or fluidization time, decreases as a power-law with the applied shear rate (or with the viscous stress) which provides a direct link between the transient and the steady-state behaviors of a simple yield stress material. We have interpreted these results in terms of a critical-like phenomenon and we are now working on other simple yield stress materials to extend the validity of our results. 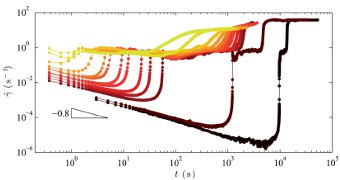 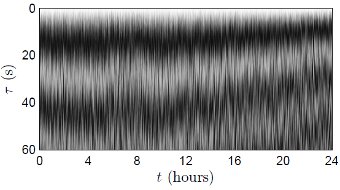 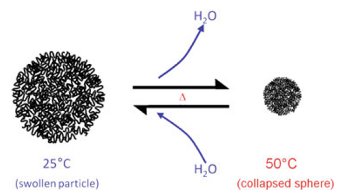 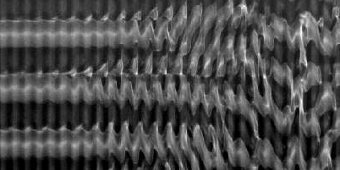 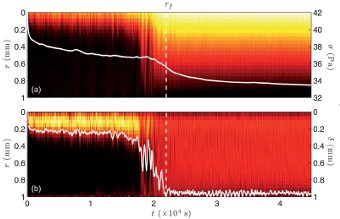